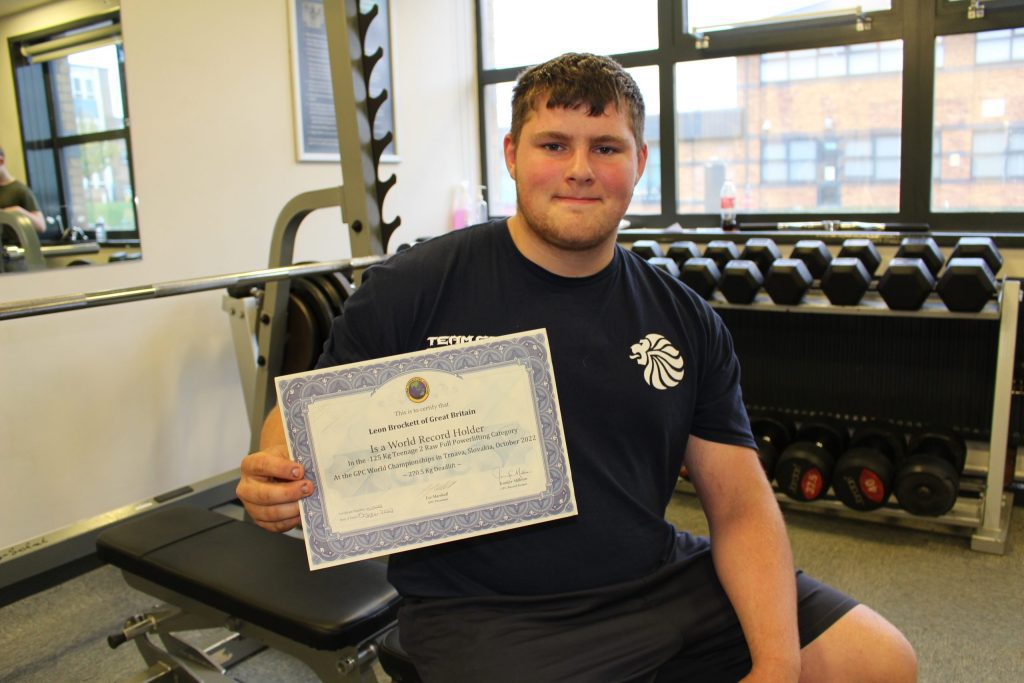 The talented weightlifter has only been taking the sport seriously for around a year and a half after receiving encouragement from a coach at his local gym and being armed with knowledge he has learnt from his College course.

Leon travelled to Slovakia on the 17th October 2022 with the support of his family to achieve his dream of becoming the World Champion for his age and weight category. Leon took part in bench-press, deadlift and squat. Leon broke the world record in the 125 Kg Teenage 2 Raw Full Powerlifting Category with a 270.5kg deadlift. He also managed a 130kg bench press and a 255kg squat at the event.

Leon said, “I never expected to get the results I did on the day. I am already planning on beating my own record by at least 10kg next year, my target is to achieve 280kg. I would like to venture into more strongman competitions in the future but my focus for now will be on my deadlifting again. I will learn from my experiences and any advice given.”

Leon trains at Warriors Gym in Barton where he has been having personal coaching sessions there that have helped him perfect his technique and leading to his success which has spurred him on to exceed his world record for next year.

Eddie Hall has been an inspiration for Leon and even met him at an event where he managed to get his belt signed by the celebrity. When Eddie heard about Leon’s success, he sent a personal recorded message congratulating him on his success and encouraging him in the future. Leon said, “Eddie said in his message to me about diet and making sure I’m eating right, about nutrition and concentrate on form. I have been learning this from my coach and I have also learnt a lot from my college course around science, muscles, bones and the human body.”

Leon has now joined the College Talented Athlete Scholarship Scheme (TASS) at North Lindsey College and this will allow him to achieve his personal goals without compromising his education. The College will make allowances for Leon to train and make any timetable adaptions, nutrition advice, well-being support and speak to other young athletes in similar situations.