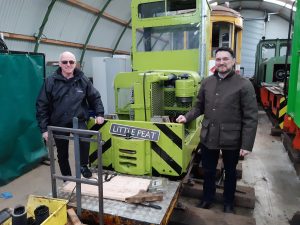 Construction at DN Colleges Group have pledged to create a station platform at Crowle Peatland Railway.

Doncaster College and North Lindsey College students will take on the project to develop their skills in the community on a real client-based task. Engineering students have already brought a small locomotive back to life at the railway and will now see Construction students’ involvement in a new project which will see them erecting a new station platform.

Martyn Butler (Director of Construction, DN Colleges Group) said, “This is a really good community project for our students to get involved in and is a practical experience for students who will build a station platform on the site. The work undertaken will include the groundworks, brickwork and the station top which will enable easy access to the nature reserve.”

The project will start with T Level students surveying the area and working on the planning for the platform before construction students begin the build. The long-term plan will see a 500m long track for the locos to travel on and a platform that will enable passengers to easily access the loco safely.

The College initially got involved with the Crowle Peatland Railway after helping to restore an abandoned Simplex 40hp locomotive which was left decaying on the moors. The loco was historically used to haul the peat trains, hence its name ‘Little Peat’. Peat extraction was once used as a vital part of the economy for fuel.

The locomotive was given to the Crowle Peatland Railway in 2015 and was restored by Engineering students at North Lindsey College. The students realised that the main bearings had totally worn out and was possibly the reason why the loco was abandoned on the moor as it would have been deemed unethical to repair.

The loco is now unrecognisable from when it first came to the College for a full restoration which was then sent to Jack Tighe in Scunthorpe to be fully shotblasted and brought back to its original state.

Phil Scott (Learning Facilitator at the College) played a crucial role in the project and said, “When I first saw the project, I thought it was almost impossible to get it back to the standard we did. The loco now really looks the part at the Crowle Peatland Railway and it is credit to the students that worked on it.”

Work will commence on the platform station, for ‘Little Peat’ and the other locomotives that are housed at the station around late spring and the project will run throughout the summer.