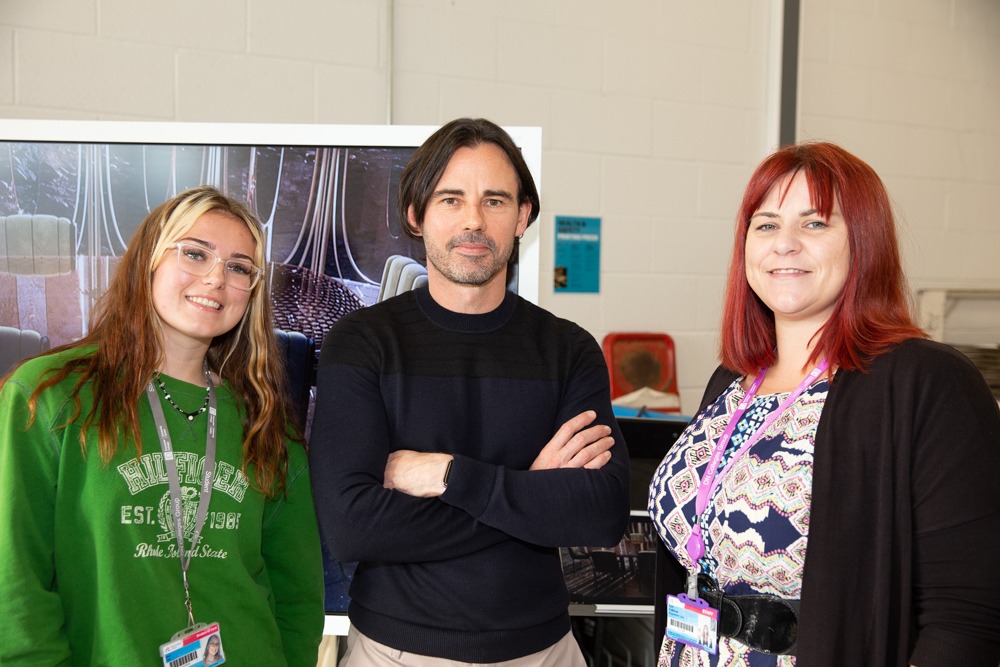 As an alumni student Julian wanted to share his story and successes in the design world and offer his advice to current students on the course where he studied and his journey began.

Julian studied at North Lindsey College after being inspired by Alan Kirsch (former course leader) and liked the idea of studying in a dedicated building focused on creativity, the arts and design. He completed the BTEC national in design as well as an A level in art and design and then managed to secure a place at Ravensbourne College of Design & Communication in London.

Upon graduating with a 2.1 BA Hons degree Julian began his working career for Wickes building supplies in the marketing department developing a new store show room experience for Kitchens and Bathrooms which enabled him to develop computer CAD and 3D skills. “At the time I had very little computer experience and designers were making the transition from the traditional drawing board to computer and Wickes were prepared to train me and pay a decent graduate starting salary,” said Julian.

Julian continued: “My first role in luxury Interior design was for Tessa Kennedy Design in London, working on very exclusive luxury residential and hotel projects such as The Ritz Hotel in London, Private members clubs in Mayfair and residences in Hampstead and Belgravia for A list clients. I think this role was a major turning point, it allowed me to focus on very high-end design on an international level, all of a sudden the world became a very small place after working on projects in Italy, Russia and the USA.”

Julian’s appetite for luxury design led him to Foster + Partners architects where he worked on a number of exclusive projects such as The Yacht Club de Monaco and luxury residential and mixed-use buildings in Turkey, Asia and the Middle East. Julian said: “After Foster + Partners I felt I could work anywhere, they opened a lot of doors for me, they are a hugely successful practice designing iconic building projects all around the globe. Lord Foster is regarded as one of the most successful architects of all time.”

Julian continued, “I met my wife at Foster + Partners and she had lived in Italy previously which really appealed to me, especially from a design perspective, so we both decided to move to Milan, unfortunately the financial crisis of 2008 really forced us to move where the projects were such as the Middle East and Asia. We spent 2 years at HBA in Singapore working as design directors which really gave us great exposure to Asia which was a wonderful experience. We decided to head back to Europe in 2012 to get married before deciding to settle in Amsterdam where we worked for three and half years. In 2017 I was offered a role at YabuPushelberg in Toronto, who I considered to be one of the very best luxury interior design companies in the world, so we relocated and I worked as a team leader for two and a half years and my wife Michaela worked as a creative Director at another design company in the city”.

After living away from the UK for over 10 years, Julian and his wife felt they needed to reconnect with Europe and spend more time with family and friends which led them back home to the UK. Julian has been working as a freelance designer, developing his own furniture and is about to start a new role as a global design director for a luxury Hotel operator.

Julian stated: “North Lindsey was the place where my interest in art and design was supported and allowed to develop and a belief instilled that I could peruse an actual life and career as a Designer.”

Ruth Crabtree (Team Leader, Creative Arts) said: “We were so pleased that Julian was able to visit North Lindsey College and show us some examples of the fantastic projects he has worked on. The students gained so much insight into the industry and potential career pathways. Knowing Julian started his professional journey at North Lindsey College has been a huge motivation for them in their initial stages of their specialist practice. We look forward to welcoming Julian back again in the future.”

We use cookies on our website to give you the most relevant experience by remembering your preferences and repeat visits. By clicking “Accept All”, you consent to the use of ALL the cookies. However, you may visit "Cookie Settings" to provide a controlled consent.
Cookie SettingsAccept All
Manage consent